Motherhood is a lonely journey and I figured that out within the first week. Even if you have the most sympathetic partner, there are things that you go through as a mother – changes in your body, feelings, emotions, thoughts – that even your partner cannot fully understand. What helps is having someone to talk to – someone who has gone through the same things you have. And what is even better is having someone who is currently going through the same things you are.

I have been very open about my feelings and emotions from a very young age. I was always the daughter who hugged and kissed her parents for no reason other than it had been over an hour since I last did so, I was always the niece who welcomed her uncles by climbing in their godis as soon as they walked through the door, I was always the friend who was available to talk over the phone whenever someone needed to just vent even though my mother would give me dagger looks because I had an exam the following week or even the following day. 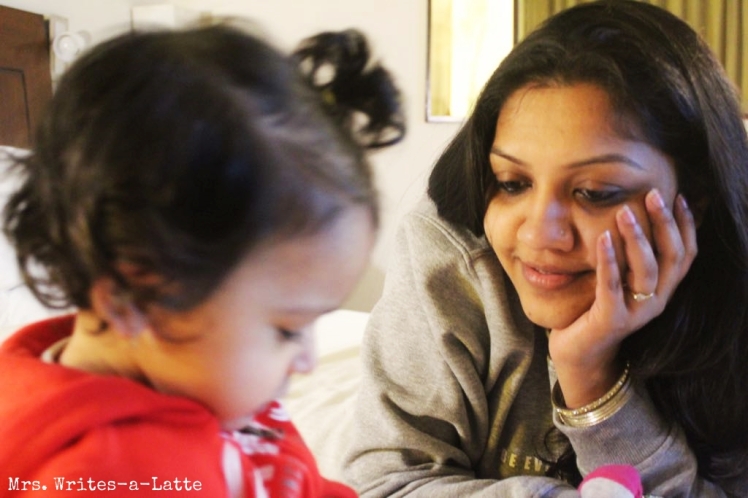 There was a point in my life when, much to my mother’s dismay, my friends were EVERYTHING for me because that’s the kind of person I am – the all or nothing kinda girl; someone who will give everything to a relationship not because she didn’t know how to say no, but because she didn’t want to.

I am also extremely open to criticism, but sadly, that has more often than not been misused by people to get away with saying anything they wanted to while making it seem like I had a thing or two to change about myself.

A long time ago, in my late teens, this used to affect me a lot because opinions from friends mattered to me. I remember that one day in April 2005 when a friend gave me a lecture about how everything I did was wrong and it affected me so much that I came back home and cried for hours and caught a fever. I had my CA PE I exams in a week or so, but asking my friend why she wasn’t talking to me and listening to her list out why I was apparently the most horrible person ever (because I was excited about my new relationship and talked about my boyfriend a LOT) was more important than studying for a crucial exam.

But that’s who I am. Or at least was, until very recently.

You see, with the advent of technology, phone calls are becoming rarer and WhatsApp is now the hub of everything. While I get how convenient it can be, I still find it to be very, very impersonal because I know no one is really rolling on the floor laughing when they type ROFL, and it’s very convenient for anyone to pretend to be nicer than they really are when they have a few minutes to think about their reply and the ease of emojis to sweeten the blow, when in reality they’re either being sarcastic or just plain sugar-coated – read: Fake.

I had a working relationship two years ago where the employer only communicated on WhatsApp or email and things went wrong very quickly because it’s very difficult to interpret tone and very easy to misinterpret it over messages that are typed quickly and are more often than not half sentences. Obviously, I take equal blame for the misinterpretation, but that made me cautious about not knowing the voice behind the words because when you’ve spoken to a person, you can almost hear them talk when you read their messages.

Anyone who’s ever worked with me would know that I prefer to talk over things than just over messages because any confusion then gets resolved almost immediately.

I’m a talker. I like having friends and while I have real life friends, most of them aren’t even on the same chapter as we are (most of them recently married), let alone the same page. We started drifting apart when Sandeep and I got married and started declining invites to hang out more than once a week because we had to think about how much we could spend on a weekly basis on outings and parties as we had to pay rent and run a house, while our unmarried friends had fewer responsibilities. And the ones who do have kids are in another country. So imagine my delight when I found other moms to talk to, and when I say talk to, I really mean ‘talk’ to.

When I befriend someone, I don’t hold anything back – I talk about what’s going on in my life, I share what I feel, I even share what I’m about to do – I invest myself in my friendships. And while I don’t expect the other person to tell me everything or call me their best friend, I do believe that the friendship is mutual – as in, we are both interested in being friends with each other because we like the other person for WHO THEY ARE and enjoy their company.

Turns out, it’s not always mutual, and right now, nothing rings truer for me than the saying, “Friends are for a reason, a season or a lifetime.” I’m sure you’ve figured out that it wasn’t meant to last a lifetime. And while I’m not grieving the loss of any of these so-called friendships, I am evaluating how much of an emotional fool I have been to think someone is my friend, that they want the best for me, that they will cheer me on, that they love my company, that they believe in my dreams.

Instead, what I got in return was discouragement (why do you want to do all of this?), and being termed as a distraction, and of course, taken for granted. I sometimes miss that phase in my preteens when my mouth had no filter and I just said whatever I had on my mind without giving two hoots about how it would make the other person feel. I didn’t have many friends, but neither was I crying into my pillow. But my ‘you can tell me anything’ attitude has actually brought me more criticism because apparently that also somehow translated to ‘I don’t have feelings.’

As of today, I’m careful about who I let into my close circle and with whom I discuss personal stuff because on some level, I feel like I was taken advantage of or not valued enough as a friend when I certainly considered the other person quite important to me and shared quite a bit of what I wouldn’t have shared with anyone else.

So forgive me if I have seemed cold to anyone who has recently tried to strike a conversation with me; I’ve become a bit cynical about people’s intentions, because the time and effort I put into a relationship seems like a waste later, and I don’t seem to have too much of that lately, so I need to use it wisely.

But as much as I will be careful about whom I open up to, these experiences will certainly not deter me from making new friends. It just might take longer.

P.S. I don’t think I am perfect, certainly not, and I most definitely recognise my flaws – some that I’m actively working towards improving, some that I cannot change no matter what. But being flawed doesn’t mean I can’t feel hurt for things that were said to me even if I was also a little bit wrong. Two wrongs don’t make a right, you know.

I am embracing my emotions & taking part in The Emotional Wellbeing Campaign by @mombloggersunited. To participate, share your stories using Hashtags –  #DontJudgeMBU & #LetsTalkEmotions

2 thoughts on “I am, but an Emotional Fool”