I just devised a system to review books and henceforth, whenever I do such reviews, I am going to judge and rate books based on these points. At the onset, let me make it very clear that I DO NOT consider myself as any form of authority to pass such judgements, but these are only my opinions as a reader and a budding writer, something I felt when I read the book(s). Feel free to disregard any or all portions of the review and form your own opinions when you read the book. Review may include spoilers and therefore, reader discretion is advised 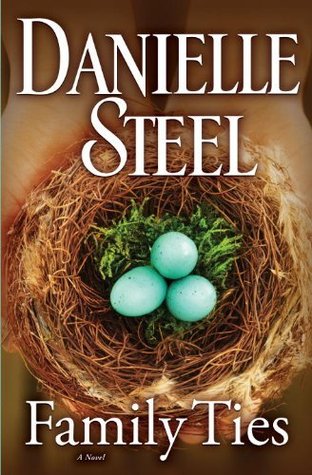 Rating: 1 out of 2
Family Ties is, not surprisingly, a story about a family, their troubles and sacrifices for each other and how they stick together when there’s crisis. At the heart of the story is Annie Ferguson who at twenty-six ‘inherits’ her sister’s three children when she and her husband die in a plane crash. Clearly, she’s not ready for three kids when she’s only recently finished her education as an architect and has just started practicing.
As I was reading the first few chapters, I thought this was going to be Raising Helen all over again – how Annie rises to the occasion and raises three kids, the oldest one being twelve years old; but I kept going on.
Luckily, that entire episode was over in about four chapters and the story fast forwards to sixteen years later when the kids are all grown up and Annie still hasn’t had a serious relationship barring the one she was in when her sister died.  The guy bailed when he found out she now had the responsibility of three children.
The rest of the story is about how Annie is now dealing with the kids’ grown up troubles, obviously putting theirs before her own and has a hard time accepting that they are all adults now, letting go and allowing them to make their own mistakes, and they do make a lot of them.
If the part about her raising her nephew and nieces was stretched to more than five chapters, I doubt I would have continued reading the book with the same interest level because I have already seen a movie with that story, but just because it didn’t, I wanted to see where she, the author, took the story. For the most part, I enjoyed the story because it focussed equally on the lives of all four important characters – Annie and the three kids, Liz, Ted and Katie, and I hadn’t read something similar so it was new for me. Each of their lives had a different direction, a different conflict and a happy resolution, which was good enough for me.

Rating: 1 out of 2
There were some parts of the story that were boring (I’ll get to that in the next point) but for the most part, it was engaging.  Each one of the characters was well written – they were human, they were flawed and the most important part, they were consistent in their behaviour. There’s something about that that makes them more believable and relatable. The issues they faced were grave and sometimes shocking and I reached a point where I thought, how could they be so stupid? But hey, that’s what makes a good story.
That being said, even though the characters were good, they weren’t the kind that touched your heart and would stay with you forever. They’ll be on your mind as long as you read the book, but once you’re done, with the next book you read you’d move on to another world with a whole new set of people.
But as long as you’re reading this one, they’ll keep you hooked and you’d want to know what’s the next stupid thing they’d end up doing.

Rating: 0.5 out of 1
This is the first Danielle Steel that I read, and after one Wikipedia entry I confirmed that this was not her first book. She has been writing since 1973 and Family Ties was published in 2010, so she had thirty seven years of writing experience and more than sixty books before this. SIXTY books is a large number and I did not expect such kind of writing from such an experienced author, and here’s why.
When I started reading the book I felt like she was writing for teenagers and I thought maybe I was starting late; I should have read this when I was in college. But when I read further and the story described passionate and steamy love-making, I changed my opinion about the age of the audience this was intended for because it clearly wasn’t for children.
When a book is written for adults, I have certain expectations. I do not expect sixteen letter words to be used and do not enjoy referring to a dictionary often when I’m reading because that breaks the flow, but I would like to see a variety of words used. For example (and I am NOT quoting):
Liz had an important photo shoot in Paris. They were sourcing jewels from some of the important designers and Liz was really excited about it. It was for an important feature in her magazine. And she couldn’t sleep.
The sentences were short as if the people she expected would read her book wouldn’t be able to make sense out of a long and slightly complex sentence. Also, after a while I was bored with how ‘important’ everything was and how any random sentence began with ‘and.’ Here’s how I would write the above paragraph.
Liz had a two-day photo shoot in Paris featuring jewels from some of the most talented designers. It was for a major feature in Vogue and the excitement kept her awake.
Slightly better, isn’t it? It’s shorter and uses different words to describe the same thing.
Another thing that annoyed me was the repetition of certain sentences/emotions, sometimes in two adjacent paragraphs. I lost count of how many times she wrote the following; again, I DO NOT quote:
Even so, it was still better than reading ‘Holy Shit’ (50 Shades) after every paragraph.
At one point it felt like someone forgot to edit the novel and just printed whatever she wrote. Writing two or three books a year and the pressure of publishing them can let this happen. As a reader, I was not amused and it was slightly off-putting, but I read the whole thing anyway.

The story wasn’t enlightening, it was like any other family story, but it managed to entertain me while I was reading it, and even though the writing was slightly flawed for my liking, I could get through the book without feeling the need to want to tear the book apart.
I would rate the book at 2.5 stars.
P.S.: This is the first of her books that I have read and maybe it wasn’t the right one to start with. After reading her Wikipedia page it’s hard to believe that all her books would be similar. My only dissatisfaction has been with her writing style and if any of you out there know she has written better books and this one was an exception, please suggest one of those. I would love to read them. She has written too many books and given that they were all best sellers, it would be a shame if I didn’t read more based on my opinion of this one book and even that would only be because I picked the wrong one to start with.
Thanks in advance 🙂